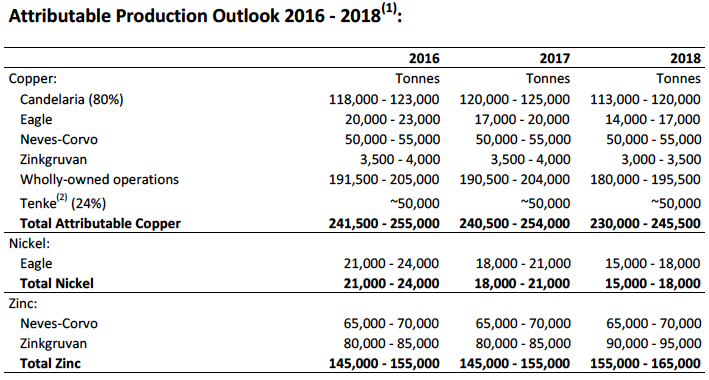 (1) Production guidance is based on certain estimates and assumptions, including but not limited to; mineral resources and reserves, geological formations, grade and continuity of deposits and metallurgical characteristics.

(2) Tenke guidance has not yet been provided by operator, Freeport McMoRan Inc. (“Freeport”). Lundin Mining anticipates future production from Tenke to be comparable to expected 2015 production.

In a press release (Marketwired – Dec. 2, 2015) Lundin Mining Corporation (TSX:LUN)(OMX:LUMI) (“Lundin Mining” or the “Company”) provides the following production guidance for the three-year period of 2016 through 2018. Key highlights are as follows:

The Company is also conducting a further review of operating costs and considering actions required in order to preserve healthy operating margins under a sustained period of low commodity prices. The 2016 outlook for cash costs, capital spending and exploration programs will be disclosed towards the end of January 2016.

Mr. Paul Conibear, President and CEO commented: “The Company’s near term strategy is focused on stable production with low capital investment and improving operating costs, in order to maximize profitability and cash flows, preserving a strong balance sheet. The stability of our producing assets combined with the strength of our balance sheet, ideally positions the Company to generate leading returns to shareholders in any commodity price environment.”